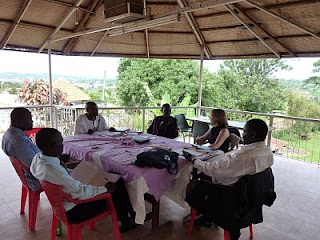 In 2007 the Christian Schools Association (Uganda) was formed to bring together Christian schools throughout the country for sharing of ideas, mutual encouragement and networking.

Our schools in Kibaale, Rakai were some of the founding schools and three of our school administrators, Peter, Eleazar and Allen serve on the committee that is steering this national organization. Arleen is also on the national committee of founding members.

A concentrated effort is being made at the moment to mobilize many other schools, particularly in the Rakai and Masaka districts where interest seems to be very high. 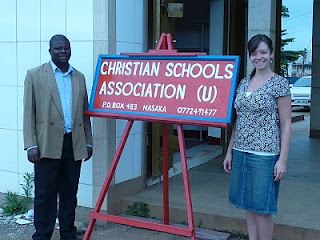 One of our Canadian volunteers living at the Timothy Centre, Megan Churchill-Browne, has taken up the responsibility of manning our small office that opened in Masaka town in February. 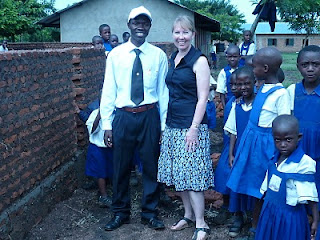 Last week Arleen made a visit to Rwentutu Christian School in the far western part of the country together with Ray and Pat Sutton, our Canadian director for PAOS.  The headmaster of this school had attended some of the teacher development workshops we conducted at our Kibaale schools and has been training his teachers in biblical worldview integration.

It is encouraging to see schools start to catch the vision for teaching from a Christian perspective, and we were happy to share more resources with them. 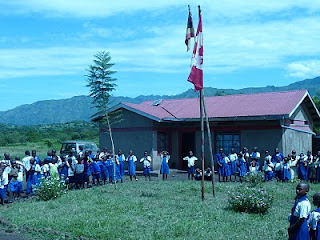 The Timothy Centre land extends to a wetland area just outside of Masaka town, Uganda. Since there is no piped in water, the surrounding community relies on alternate sources of water, some of which are the stagnant pools of nearby wetlands or from local springs.

Some of the local population gets their water from a local spring on the site. 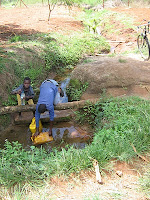 The water at the spring has been tested and found to be unsuitable for drinking, yet local community members continue to draw water from it.

Clean water was found at a depth of 69 meters.

It's great to see the smiles on the faces of these children.

Posted by Karl + Arleen Buchholz at 2:33 PM No comments:

Back Home In Uganda 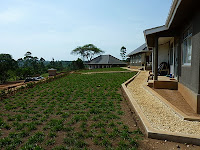 We arrived in Entebbe via London on March 10th and drove to Masaka the next day to face a house full of bins and boxes.  So began the process of settling into our present home in the Timothy Centre Guest House compound.  We have thoroughly enjoyed the peaceful green hills surrounding the centre, waking up to the singing of the birds and falling asleep with the sound of frogs and crickets croaking melodiously in the valley below us. 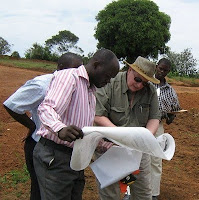 Our days have been filled with a variety of domestic activities and we’ve also begun to resume our work and ministry responsibilities.  Last week we hosted our Canadian director Ray Sutton and his wife Pat, and laid plans for the next few months of construction and programs here at Timothy. 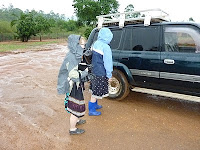 We’re in the beginning of the rainy season, and we’re glad for some sunshine today after three days of heavy rain.  Easter found us slogging through the mud to our vehicles, then driving through pot-holed roads to attend an Easter church service in Masaka.  It was worth the effort and we capped the day by celebrating with a special Canadian style Easter dinner with our Canadian collegues (Megan & Paul, Lizabee), Megan’s parents who were visiting from Canada and some Ugandan friends.
Posted by Karl + Arleen Buchholz at 10:25 PM No comments: