About 6 years ago I was introduced to a 19 year old boy from Kibaale, Rakai who had broken his leg in a football (soccer) match with some school friends.  At first Godfrey thought his leg would heal quickly.  Soon complications set in and a serious infection was found in one of the bones in his leg.  Shortly thereafter doctors removed the fibula.

It was several months after the operation that Godfrey hobbled into my office to see me, yet he was full of joy and optimism for the future believing that God still wanted him to become a doctor.   He informed me that doctors now believed that they might need to remove the entire leg due to the spread of the infection. 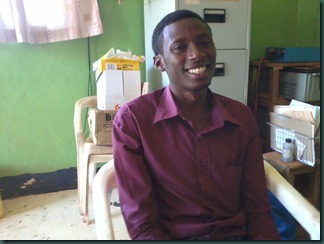 In God’s providence, about a week later we happened to have dinner with Brian Dorman the director of Africare, a Northern Ireland mission,  who informed us that they specialized in treating disabled children from all over Uganda at a place called Cherub, near Mukono town.

Within a few weeks Godfrey was admitted and had an operation to save his leg by grafting bone from his hip.  Although there were a few complications, the operation proved very successful.

Today, after about  6 years I met this young man in Kibaale, with the same contagious smile, walking without crutches and so thankful that God had saved his leg.

Oh by the way, he is in his second year at a university in Kampala, studying to become a doctor.  Miracles do happen!